NEW ZEALANDThe airline does not intentionally add Aboriginal words when responding to customers, forcing them to look up a dictionary if they want to understand.

A customer posted a question on the Air New Zealand airline's Facebook page on November 26, "When will the Koru Club lounge at Wellington's domestic flight area be refurbished and open to welcome guests? It has closed the store. It's been a month ".

The airline quickly responded, "Kia ora, we are working hard to complete the excellent lounge to serve our customers. We hope to have more information about this soon." Looks like, "hey ora" means "hello".

However, the guest expressed dissatisfaction and replied: "Hello (I'm not a Maori), is the waiting room likely to open in mid-December?". The response of this customer was mixed, as many thought it was racist. Because Maori is a tribe in New Zealand. Over the centuries of isolation, these indigenous people have developed a unique culture, with a unique language, a rich repertoire of myths, crafts and performing arts. 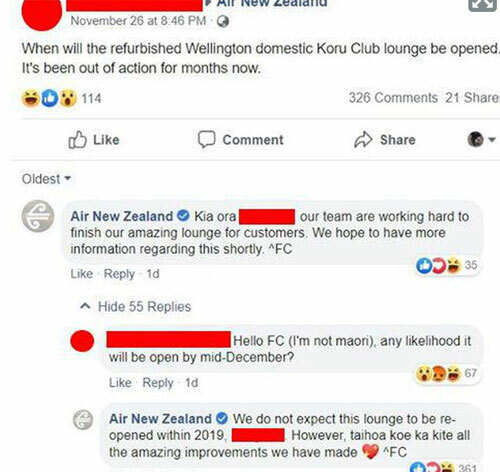 Customer questions do not get the approval of other customers. Many people think this joke is not charming, because it evokes racism. Photo: Facebook.

The airline representative responded in a humorous, but equally sharp way, to "warn" customers about their words. Instead of answering guests entirely in English, the company representative intentionally used words in Maori: "" We don't think this lounge will be reopened in 2019. However, taihoa koe ka kite socks all the great improvements we've made. "In it," taihoa koe ka kite "means" wait, and you'll see ".

When the customer mentioned that he was not an aboriginal person and asked for an easy answer, the airline representative sent her a link to the online Maori dictionary website. However, another representative of the company still left a clear explanation in English for the above customer, and ended the conversation there.

The customer post was later taken down, but others were able to capture and share it online. Many have praised the airline's professionalism for cleverly demonstrating Maori culture in every small action. Some even humorously voted for Air New Zealand's response as "the prank of the year" and "the best response from an airline".