Passport attached chip is effective security, limiting the status of copying identity theft to unauthorized entry. The Ministry of Public Security proposes to attach an electronic chip to the passport. Instead of using paper passports, many countries have used biometric passports, also known as electronic passports, digital passports, or e-passports. 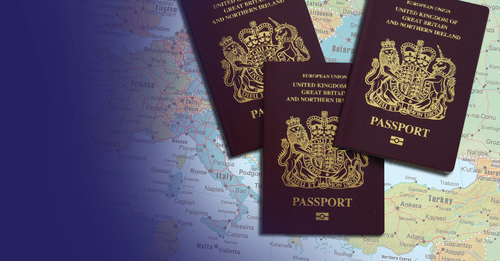 The yellow image below the passport is an electronic passport identification logo.

The biometric passport is actually a normal paper passport but has a very thin electronic chip. In addition to common personal information (such as: full name, date of birth, photo, signature, nationality ...), the chip will store one or more types of information used to identify the biometric of the owner. such as faces, fingerprints, and irises, depending on the country of issuance.

According to Postoffice, e-passports were created in the context that many countries and territories have to tighten border security to limit terrorism. The information stored on the chip is very secure, making it very difficult for counterfeiting and high costs when the security mechanism is implemented properly and completely.

Some countries, such as the United States, also integrate thin metal or mesh into the passport cover to shield the chip from copying remote data (skimming).

Another benefit of chip-attached passports is quickness. For example, there are automatic entry areas in the UK for British, EU, Swiss, and some other countries. Here, instead of wasting time with customs officers, the computer will automatically scan the passport, collate personal information, face recognition, and allow entry if valid.

The identity of an electronic passport is a drawing similar to the yellow camera on the outer cover, according to the standards of the International Civil Aviation Organization - ICAO. However, passports issued by some countries before international standards were born do not have this logo.

Since then, many countries have gradually switched to electronic passports, such as Thailand, New Zealand, Norway, Japan, the United States, Russia, Singapore, Brunei, Venezuela, Egypt, Nigeria, South Korea and the Philippines. The most recent are Cambodia in 2015, Laos in 2016, India in 2017.

China first tested an electronic passport with a representative of the Chinese government going abroad to conduct official duties in 2011. According to Chinadaily, in May 2012, China began issuing electronic passports for people. people.